Posts : 207
Join date : 2010-12-21
Well, I've just bought this nice laptop on TigerDirect (Would've bought Newegg had they not overpriced it by $100) And I've used it for a number of things and to be honest it was an iffy buy, usually these kinds of non-mainstream laptops have severe issues with them... But so far I have found none, although there was some serious issues with the banding of the gradients, but after uninstalling a lot of the bloatware it runs like a dream now.

Style
I like the style a lot here, it has a matte finish, so no fingerprint oils show through, and it looks sleek and professional, and very elegant. The slim form factor works with this laptop and doesn't hamper it a bit, it is light and the logo isn't overly big. The speakers could have been of more decent quality though, they're incredibly quiet, but they do provide a nice clear and crisp sound.

Performance
I have never seen a laptop of this kind with the performance of a cheetah. Literally, I can play the last level of Crysis on medium settings at around 30FPS, there's no input lag and the computer is very responsive. I can game casually or hardcore and the nice design works well on battery too. I can design my banners on here without any hassle of lagging with the CPU and overall it runs very cool, except when you do game, but in that case, keep it on the desk/table. the laptop has a whopping Quad core A6 APU (AMD Radeon 6520G) in it along with another dedicated 6650M 1GB card. These 2 cards are in a CrossFire environment that works exceptionally well.

Reliability
Eh, the laptop ran iffy at first, I had WAAAY too many programs installed (bloatware) and I had issues with the graphics. But now, it runs like a champ with very little problems other than that stupid sleep mode, occasionally it screws up and hangs, but this only happens if you put it to sleep constantly. The battery life is solid, I don't care what anyone says about that, for the amount of BS people keep labeling on it, IT'S A $500 LAPTOP PEOPLE!!! Honestly though, it runs VERY well for only a 6 cell.

Price
Can't beat the price for this laptop, seriously though, this may turn you if you're an avid HP/DELL fan. I have no regrets for buying this laptop, hell, it's not a gaming laptop and I can game on it better than some of those $1000 Big Brand notebooks. Dropping around 5 and a half is definitely worth the price of a solid laptop, gaming or otherwise.

Features
Comes with an amazing set of features, a multi-touch touchpad, an Atheros Wi-Fi card, Realtek sound, Altec Speakers. The nice option is also getting a free Anti-Virus suite, which I haven't used yet. The LED screen is also a great touch, 1366x768 pixel screen isn't exactly the best resolution out there, but I'm actually glad that I'm getting something that looks great on native resolution and is better than my old 1280x800. the screen is glossy, which I do hate because of all the reflections on the darker spots, but looks gorgeous nonetheless. 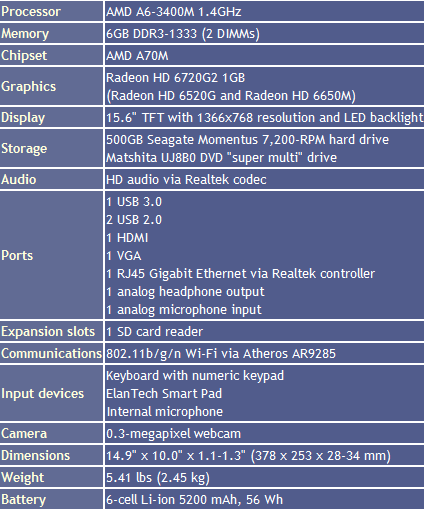 in other words, I will be coming back to ASUS for another laptop, so keep up the good work ASUS!

Posts : 207
Join date : 2010-12-21
Well, I'm back and looking at several aspects of which I never covered in my previous review. So I'm going to cover more in depth with the performance and reliability of this laptop, and even better, the overclocking potential of this magnificent $500 beast, which is what we really want isn't it?

Here's some pics with K10 stat and HWMonitor


This is my severely underclocked version which runs at a whopping 525 Mhz per core at .8000 V, I could probably get this voltage down far lower with some tweaking, but for now it's pretty good, I can even render full 1080P MKV videos without staggering the CPU. It usually runs around 30-40 C idle and 50-53 C under max load, so imagine getting this down even lower

. I am messing around with more speeds/voltages, which you can see (20C Min), but I'm not happy enough with the results quite yet (Windows 7 apparantly DOES NOT like a 333 Mhz Quad core

This is my overclocked version, just for everyday use, runs very decent with a significant speed increase. I want to up the clocking more, but this is fine even for gaming, but for GTA IV, which is a very poor console port to PC, I still need an additional 500 Mhz for it to really solve the choppy framerates entirely.

It seems that the GPU really just brutes its way through 90% of games, I have overclocked it and gotten a few frames here and there, but running stock, this baby runs ice cold, even in crossfire mode. The integrated even trumps some games on medium settings, while the dedicated seems to have 2x's the power, but together... This combination seems to really take the cake and holds no prisoners. It plows through most games without so much as breaking a sweat. But word to the wise, the CPU *is* bottlenecking you at the stock 1400 Mhz, if you overclock it even 2-300 Mhz, you'll see a HUGE difference without that much increase in heat, especially if you mess with the voltages right.

If you are planning on messing with the GPU, overclocking-wise, then be prepared for a fight, the card sometimes doesn't identify right (most games *only* read the card as the 6520G, but don't read the dedicated), and I even have trouble keeping the clocking from going crazy, but as I said, I don't think that the GPU needs to be OC'ed, but if I ever get around to it, I'll definately try undervolting it to get a cooler base temp.

I'll report back after I get the minimal voltage on my Overcloked and Ultra Portable profiles, and the GPU undervolting.

*EDIT* At 500 Mhz even, I was able to attain .6500 V and stay stable. After hitting 6250 I was getting weird issues with K10stat and receiving little black lines in between the buttons while flickering, after 5 more seconds, the CPU flickered and the system froze. So I'll stay happy at .6500